The scandal surrounds the 1 Malaysia Development Berhad (1MDB) state investment fund in Malaysia, the region’s fourth-largest economy. It is one of the largest money laundering cases ever seen globally, running into billions of dollars, and is still making the headlines as new charges are brought.

1MDB has sparked money laundering probes in at least six countries, including the US, Switzerland and Singapore. The former Prime Minister of Malaysia was arrested and charged by anti-corruption officials in 2018. Furthermore, several banks throughout the region and beyond – including major global brands – have been implicated, causing them to lose earnings and reputation.

In the wider APAC region, a recent FICO survey reveals that only 18 percent of Asia Pacific banks have a strategic plan to fully integrate their fraud and AML compliance functions.

Malaysia is not the only country in South East Asia where companies are struggling to fight money laundering (ML) and terrorist financing (TF). According to the United Nations Office on Drugs and Crime (UNODC), money laundering is still a serious threat to most states in the region, due to cash-based economies, and weak legal frameworks, border controls, and regulation.

However, throughout most of South East Asia, governments, industry groups and companies are making progress in combating money laundering and terrorist financing and banks’ improvements in customer due diligence (CDD) and adverse media screening are a key factor.

The Asia/Pacific Group on Money Laundering (APG) evaluates its members against internationally accepted AML and counter terrorism financing (CTF) standards in the Financial Action Task Force (FATF) 40+9 recommendations. These evaluations have recorded considerable progress among states in the region.

However, the threat is still huge and companies need to do more. In 2019, Transparency International published a report looking at corruption in businesses in six Southeast Asian countries: Cambodia, Indonesia, Malaysia, Myanmar, Thailand and Vietnam. It found that most people in those countries believed corruption had increased over the previous 12 months.

Transparency International called for increased collective action involving all stakeholders in the private sector. Among other things, it said business leaders should commit to anti-corruption. They should strengthen whistle-blower protection laws and practices; establish and enforce anti-corruption policies including with suppliers and other partners; and train all employees, including directors, to fight corruption. 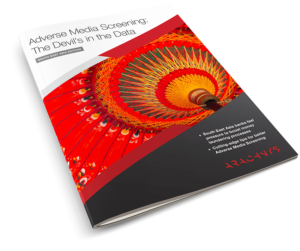 We offer a brief summary of AML measures in the top five South East Asian economies, as well as some cutting-edge tips to better adverse media screening, based on our data expertise in the South East Asia region. Download the PDF from this page.

Like
Agile vs Waterfall: enterprise software development for financial services
The case for enhanced due diligence in the pharma sector – and how to achieve it